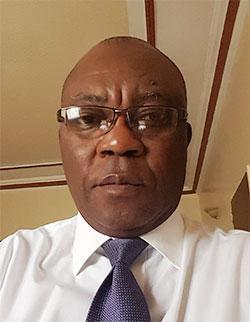 Claudio Mtuwa, the first male and second black optometrist in Zimbabwe is the current chairman of the department of optometry at Bindura University of Science Education. He trained for an Honours degree in Ophthalmic Optics (now Optometry) at Aston University in Birmingham UK, graduating in 1984. He is also a holder of a Diploma in Community Eye Health from the University of Cape Town (RSA) in 2011 and Masters in Clinical Optometry from Cardiff University (UK) 2017 with special registration (with the British College of Optometrists) as Low Vision practitioner. On his return he joined an already established optician group practice then known as Rivron Opticians (now Premier Optometry).  After a stint with Midlands Opticians in Gweru he started his own family practice, Opticare Opticians 1986 that has grown from one to 8 practices situated in the major towns and cities. He has held a number of positions, President of the Zimbabwe Opticians Association for 10 years (being instrumental in changing it to Zimbabwe Optometric Association), a board member of the Pharmacists Council of Zimbabwe (PCZ) (which regulates Optometry) for 10 years holding a position of Vice Chairman. At the same time, he was assigned by PCZ to the Health Professions Authority of Zimbabwe registration committee member. He is soon to enroll for a PHd in anticipation the supervisory role for Masters Programs.

Faculty of Science and Engineering