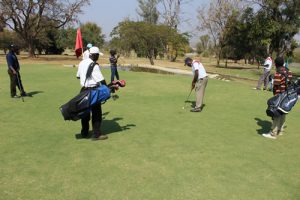 The university successfully hosted its first fundraising golf tournament on Saturday the 30th of July 2016 at Bindura Golf Club.
The tournament which was meant to raise funds for the welfare of the 25 talentees who are being groomed by the National Sports Academy had over 76 golfers battling it out for a noble cause.

The turnout was so high that some players had to be asked to come earlier to make room for others at the course, which can only accommodate 72 players at a time.

In his keynote address, the Guest of Honour at the event, the Chief Executive Officer of the Commercial Bank of Zimbabwe (CBZ), Mr Never Nyemudzo commended the university for the work it was doing in grooming talentees. He further pledged more support from his bank towards the Academy and implored the representatives of the corporate world that were gathered to continue partnering with BUSE so that the work it is doing becomes lighter.

The Vice Chancellor, Prof Eddie Mwenje thanked the participants for their overwhelming support towards the National Sports Academy. He chronicled the history of the National Sports Academy from its inception in 2006 and the work it was doing in nurturing and supporting talented athletes. Prof Mwenje revealed that the university would host more golf tournaments in future and plans were underway to have two in the following year.

Speaker after speaker praised the institution for the initiative and pledged on behalf of their organisations to continue supporting the institution’s efforts. Over 35 organisations partnered during the tourney. Among them were CBZ, Nicoz Diamond, Bindura Nickel Corporation, President’s office, Delta Beverages, ZIMPAPERS and sister universities namely University of Zimbabwe, Lupane State University, Midlands State University and Zimbabwe Ezekiel Guti University.

Golfers went away with different prizes ranging from gas-stove cookers to gift sets. In addition to the tournament winners, there were individual hole skill prizes, and a number of raffle prizes with each participant taking something home.

Speaking in an interview, the BUSE Director of Marketing and Development, Mr Thomas Mahundi explained the expenses that will be catered for by the raised funds. He said that the proceeds would go to the talentees’ school fees, examinations fees, stationery, uniforms, accommodation, training kits, competition fees, air-fares, as well as their general upkeep as they travel for competitions locally and internationally.

Mr Mahundi also revealed that plans were already underway to strengthen the BUSE golf and training had been scheduled for willing staff members.

Commenting on the sidelines of the tournament, many participants said that they enjoyed playing games and the golf course was in excellent shape and proved to be very challenging. They added that they looked forward to more of such tournaments. 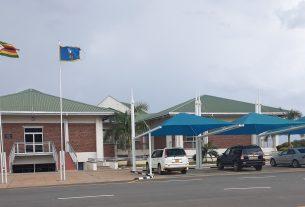 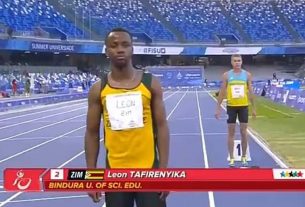