Nyaradzo Group in conjunction with Bindura University of Science Education (BUSE) held an Independence Tree Planting Ceremony on 27th May 2021.

The event which was officiated by the Assistant District Development Coordinator for Mashonaland Central Province, Mr Cuthbert Huvaya was commemorated through tree planting at the Bindura University of Science Education Farm.

Forty-one (41) trees were planted to signify the forty-one years of independence the country was celebrating. The tress were also meant to provide food security for the University Goat project in the near future.

Speaking at the occasion, the Dean of the Faculty of Agriculture and Environmental Science, Professor Innocent Nyakudya welcomed everyone present to the event. He highlighted that the ceremony was a result of Nyaradzo Groups’ initiative to partner with BUSE in the planting of trees. He went on to urge guests to adopt the culture of planting trees as the practice had positive impact on the environment.

“If we are to check with environmental experts, you can realise that we lose almost a quarter of million hectares every year due to deforestation,” said Professor Nyakudya. 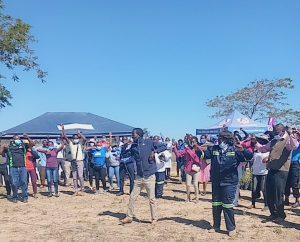 He further explicated that the rate at which people practice deforestation was much higher than the rate they were planting trees, which undeniably was a cause for concern. He hoped the Nyaradzo-BUSE Tree Planting event was going to cultivate the culture of planting and managing trees in people. A lecturer in the Animal Science Department, Mr Clement Mangwiro gave a brief explanation on how the Goat Genetics and Artificial Insemination project which was to benefit from the trees that were planted started. He also outlined some of the objectives of the project including improving the quality of goats through artificial insemination. He said that the tree planting ceremony was going to be very valuable in the future to the goats which are both grazers and browsers.

The Nyaradzo Group representative, Mr Mathias Rafemoyo weighed in saying that the planting of trees was supposed to happen any day and at any occassion. He highlighted that his organization together with other institutions have been planting trees around the country with the goal of planting around five million of them by 2026. He said Nyaradzo was to continue championing the re-greening of the environment with the slogan “A tree today, a forest tomorrow.”

In his speech, the Guest of Honour, Mr Huvaya highlighted that the Tree Planting event was a sign that BUSE and Nyaradzo were declaring war against the arch-enemy of the time which is global warming and climate change which is driven by deforestation, among other causes. “It is because of this common enemy that we are gathered here today, contributing in the fight for an environmentally sustainable Zimbabwe through tree planting,” said Mr Huvaya.

He also raised the issue of partnership where he encouraged organisations to form synergies. “I stand here to testify that partnerships achieve synergy outcomes that amounts to more than what we can achieve by individual players working on their own,” he said. He commended BUSE and Nyaradzo Group for coming up with such a noble initiative and hoped that the culture of planting trees will remain inculcated in the minds of people.

“It is our hope that all our collective efforts will result in the creation of new forests leading to a better environment for Zimbabwe and the region,” said Mr Huvaya.
Also present at the occasion was the Acting Registrar, Mr SG Chitera; the Dean of Students, Mr C. Mazodze; the Director of Quality Assurance, Mr C Denhere; Public Relations and Protocol Director, Mr JJ Gutura; CETID Director, Mrs U. Chipunza; Procurement Manager, Mrs M. Chinatsira, Nyaradzo Group officials, Chairpersons in the FAES, University staff, BUSE students and Zimbabwe Ezekiel Guti University students.