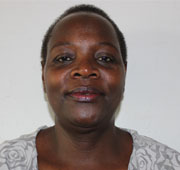 Mrs Katsinde graduated with a Diploma in General Nursing in 1989 from Parirenyatwa Group of Hospitals. She worked at Bindura Provincial Hospital as a Registered General Nurse (RGN) from January 1990 to October 1990 and was seconded to Shamva Hospital until December 1991. She worked in the Medical Surgical units as well as the Out-Patients Department. She then graduated with a BSc Honours in Nursing Science from the University of Zimbabwe in 1994. She majored in Nurse Education and was placed at the school of nursing where she taught general nurses until 1998.  In January 1999 she enrolled for an MSc Nursing Science specialising in Medical Surgical Nursing and completed her studies in July 2000. She then continued teaching at the school of nursing until March 2004 when she joined Bindura University of Science Education as a lecturer in the Faculty of Agriculture and environmental Sciences. She worked for two years and then started the Health Sciences Department in 2006.She worked in this department and left for Rwanda in August 2009 where she worked in the Nursing Sciences Department until 2012 January. She left for Lesotho and worked as a Nursing Curriculum Development Consultant for Health Systems Strengthening –Technical Assistance Project – implemented by National Institute for Health and Welfare (THL, Finland).

She worked for a year and at the end of the one year contract, she enrolled for a master of public health at the Royal Tropical Institute (KIT, Netherlands) in September 2013 to September 20

1. Katsinde C.S and Katsinde T.J. (2006). The relationship between knowledge and reported self- care practices of hypertensive patients at a provincial hospital. Southern Africa Journal of Education, Science and Technology, 1(1), 35-45.

Hypertension – no funding
THE AFTERMATH OF A DISASTER:  AN ASSESSMENT OF WATER, SANITATION, & HYGIENE SITUATION IN MUZARABANI, ZIMBABWE.(RPGC funding)