Bindura University of Science Education (BUSE) had the privilege of hosting the Deputy Minister of Higher and Tertiary Education, Innovation, Science and Technology Development, Hon Raymore Machingura on 17th June 2020. Through this visit, the Deputy Minister sought to get an appreciation of the numerous projects being implemented at the University. He was accompanied by the Director of Research Development & Innovation in the ministry, Engineer W. Ganda and other government officials.

Hon Machingura toured numerous facilities and projects in the company of the University Vice Chancellor, Professor Eddie Mwenje and some University senior officials.

The tour started off at the Astra campus which houses laboratories and facilities used for the production of hand sanitisers, face masks and different types of protective clothing.

Speaking during the Astra Campus tour, Professor Mwenje explicated the strides the university had taken in the production of hand sanitisers. He highlighted that the University had so far produced 85000 litres which was supplied to various companies as well as government institutions. He said that plans to exceed that amount was underway as the university was awaiting delivery of a 30,000 litre tank.

The Pro-Vice Chancellor, Professor Wilson Parawira who took the team through the protective clothing manufacturing chamber said the University had plans to go beyond COVID 19 as production was being expanded from the manufacturing of face masks, lab gowns and lab coats to include other lines such as corporate uniforms, graduation gowns, work suits and hats, among others.

Professor Mwenje explained the direction the University was planning to take through this goat project. “We are looking at export opportunities – commercialisation, learning and breeding,” he said. Other plans the Vice Chancellor said the University had in store for this project included establishment of an abattoir, goat dairy farming and production of goat soap. He added that the University was anticipating to get land at Kanyemba – a move which was set to help the institution intensify production.

“Kanyemba is a good area for goat production and we hope to expand the project to include exporting – shipping the goats to the Middle East,” he said.

The other facilities which were toured included the University library and laboratories (plant and cold rooms) at the Faculty of Science Education campus.

Hon Machingura hailed BUSE for fully embracing the Education 5.0 mantra, which was premised on the production of goods and services.

“We are very much impressed with what we have witnessed today. We greatly appreciate the effort the Vice Chancellor together with his team are putting in these projects.

“The first time we visited the University early in April this year, BUSE was concentrating on sanitisers only. Today, it is a different story – the university has expanded its products to include face masks, work suits, uniforms, lab coats and a goat project. This is now an industry on its own. Keep up the work,” said the Deputy Minister.

Also present on the day was the University Registrar, Mr MP Neusu; the Acting Bursar, Mr M Kamba; the Director of Research and Postgraduate Centre, Professor C. Mahamadi, the Works and Estates Director, Mr F. Kamutando; the Dean of the Faculty of Agriculture and Environmental Science, Professor IW Nyakudya and the Full time Assistant to the Vice Chancellor, Mr D. Chihombori. 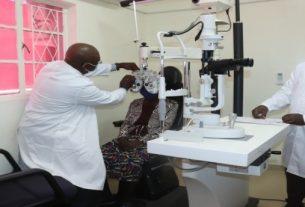 Optometry Clinic Opens its Doors to the Public