The various projects that the University is undertaking continue to be under the Government’s radar as witnessed by the several facility visits, of late, by various high ranking government officials. Thursday the 8th April 2021 was one such day which saw the University being graced by senior personnel from the Ministry of Higher and Tertiary Education, Innovation, Science and Technology Development (MHTEISTD), for the purpose of monitoring the progress on the ground. The University is currently a hive of activity undertaking the following projects: the Personal Protective Equipment (PPE) Project; the Sanitizer and Detergents project; the Optometry Clinic, the Innovation Hub; the Students’ Hostels; as well as the Goat Breeding and Artificial Insemination Projects. 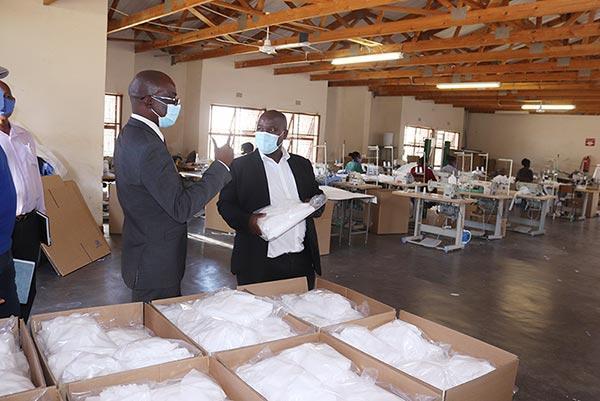 Dr. Eng. Willie Ganda, the  Chief Director of Innovation, Science and Technology Development in the·MHTEISTD led the delegation in place of the Deputy Minister, Comrade Raymore Machingura who could not come because of other urgent developments in Harare. He was accompanied by the Director for Research and Innovation and three other senior officers. Their first port of call was the Astra Campus where sanitizers, masks, and hospital gowns are manufactured. Here, Eng Ganda was taken on a tour of the manufacturing plant by the Vice Chancellor Prof Eddie Mwenje.   In the dispatch storeroom, the Chief Director and his team were shown stockpiles of the alcohol-based products. “This is where we store our sanitizers ready for dispatch to the market.  Our main customer is NatPharm, though we have other customers coming in as well”, said Prof Mwenje as he pointed out to sanitizers in various assortments.

The Vice Chancellor also indicated that apart from concentrating on the PPE project, the university was also diversifying and venturing into the soap making industry as well. He unveiled to the Chief Director a brand new Reverse Osmosis (RO) Water Purification Unit that was being installed for the purpose of purifying the municipal water used in the manufacturing process to remove salts.  The seemingly satisfied Chief Director commended the University for making great strides towards achieving self-sustenance. He also encouraged the university to look for other markets rather than mainly relying on NatPharm. Eng. Ganda also had the opportunity of visiting the sewing project that was mainly focusing on the manufacture of masks, caps and hospital gowns.

From there, the team had first hand opportunity to visit the state-of-the-art Optometry Clinic which the University is operating. There, the Vice Chancellor told the visitors that apart from training Optometry students and operating as an Eye Centre, the University was targeting producing glass used for manufacturing spectacle lenses. The glass is manufactured from sodium silicate.  This, he said, would greatly reduce the costs of acquiring a pair of glasses for patients as the University’s Chemistry Department also had the capacity to manufacture sodium silicate in-house. 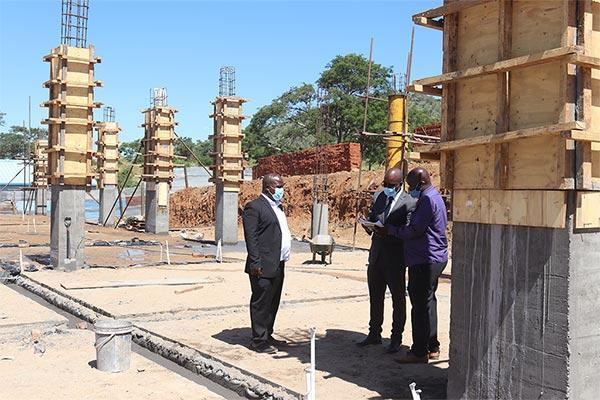 The entourage’s next port of call was the construction site of the University’s Innovation Hub at the Faculty of Science Education Complex.  The place was really awash with activity as builders went up and about their work.  The Vice Chancellor indicated that the two-story building’s targeted date of completion was July 2021. The team on the ground had already managed to complete the initial ground floor slab, together with the concrete columns. Eng. Ganda expressed his satisfaction on the pace of the project. “I am really impressed by what I am seeing here.  I must point out that the thrust of the Second Republic at the moment is centred on construction.  At the pace at which you are working, I do not see you failing to attract further funding from the government to undertake additional construction projects. Please keep it up”, he said as he commended the Vice Chancellor. On their way out, the team also managed to pass through the hostels construction site at the Mt Darwin Road Campus. The team noted that the building was now at ring beam level, and roofing was expected to begin soon.

Finally, the team drove to the University Farm where the Goat Breeding and Artificial Insemination Project was being carried out. The University has a herd of 239 goats specifically for the project.  Dr Chatikobo from the Animal Science department indicated to members that they were now ready to conduct artificial insemination. The specialized machines ordered from Germany had now been received. The goats had also been trained for the procedure. In response, Dr Ganda urged the University to be innovative and find ways of curbing the goat mortality rate that had claimed the lives of 30 kid goats so far. “As an institution of higher learning, I challenge you all to come up with solutions aimed at reducing the goat mortality rate. As it stands, the mortality rate is seemingly too high and it can militate against your progress if left unchecked”, Dr Ganda further pointed out. The tour of the projects ended here.