Bindura University of Science Education, together with the Ministry of Environment, Climate Change, Tourism and Hospitality Industry (Department of Climate Change) joined hands by signing a Memorandum of Agreement on how to tackle the climate change phenomenon. The signing ceremony was held in the BUSE Main Campus boardroom on Tuesday 23rd March 2021 at 1000 hours.

The University was represented by the Vice Chancellor, Prof Eddie Mwenje, who was flanked by various other senior members of the BUSE management. On the other hand, the Ministry of Environment, Climate Change, Tourism and Hospitality Industry was represented by Ms V Munyoro, the Director for Legal Services, who stood in the place of the Permanent Secretary for the Ministry. 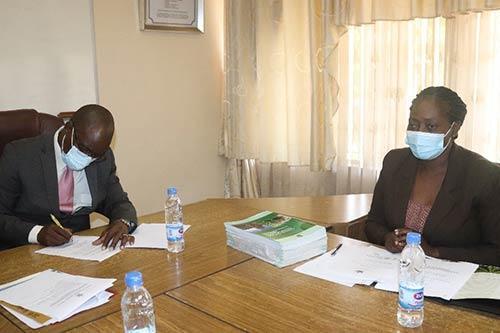 The Vice Chancellor extended a warm welcome to all members including representatives from various media houses who were in attendance. He indicated that the University had enjoyed a very cordial working relationship with the Ministry of Environment, Climate Change, Tourism and Hospitality Industry for quite a number of years, in particular, with the Department of Climate Change. According to Prof Mwenje, “This proposal has been in the making for quite some time and I am glad to see us today putting pen to paper. I believe that this is indeed, the beginning of a great life changing collaboration which will be beneficial not only to Mashonaland Central Province, but the entire nation as a whole”.

In her response to the warm welcome gesture, Ms Munyoro said that as a Ministry, they felt humbled to be associating with members of the academia in tackling climate change. She further said that the devastating effects of climate change were there for everyone to see and hence the need to plan ahead. “This collaboration will help the Department of Climate Change to gain invaluable research knowledge imparted by members of the academia in order to help us adapt to the climate change phenomenon”, she said, further buttressing the reason why their Ministry chose to partner with the University.

Mr Ndidzani also weighed in indicating that training and research programmes being launched by the Ministry were all a response to climate change. “Zimbabwe is an agro-based economy which of late has been adversely affected by prolonged dry spells and flooding. This in turn, threatens food security. Therefore, the programme that we are launching aims to enhance climate change mainstreaming in Mashonaland Central, the province in which BUSE is located”, he said.

Part of the Ministry’s strategy was to form a Provincial Committee that will come up with potential climate change adaptation measures, for example, building dams, weirs, and encouraging the cultivation of adapted crops as well as livestock. 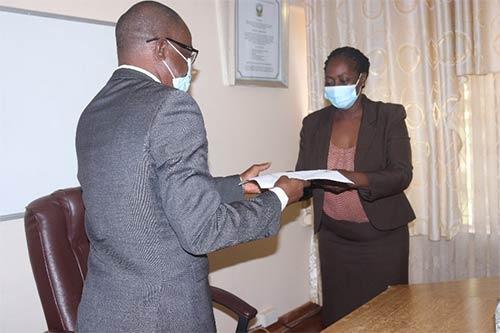 According to Mr Ndidzani, universities were there to enhance research knowledge. As part of the partnership agreement, the Provincial Development Coordinator would nominate five participants from the Provincial Development Committee who would then be enrolled by the Institution for short courses. “Upon completion, there is need to come up with research findings that will then be implemented to assist with the wellbeing of the community”, Mr Ndidzani went on to say.

He also noted that the collaboration with BUSE was going to be long-term because of the confidence they have in the institution. The Department of Climate change has been working with BUSE interns in areas of Disaster Management and Development Studies for some time.

After, the signing ceremony, Mr Ndidzani also presented to the Vice Chancellor various modules on Climate Change Mainstreaming. These would be distributed to the relevant departments as well as the BUSE library.