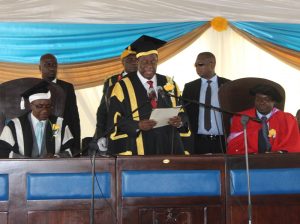 In his acceptance speech just after his installation, the Chancellor said “I am honoured to be installed as the Chancellor of Bindura University of Science Education, a responsibility which I am pleased to accept”.
The Chancellor and President also took the opportunity to congratulate all the 2018 graduating students. He underscored that graduation marks new beginnings for graduands which are full of responsibilities, opportunities and challenges. He further encouraged the graduands to gird their belts, be bold, determined and courageous as they go out into the world beyond the campus. He emphasized that all the citizens had the responsibility to develop the country.

The President also seized the opportunity to encourage the teaching and learning of science subjects. He asserted that it was important to demystify the notion that science subjects were difficult to comprehend. He encouraged Bindura University of Science education to churn out graduates who were prepared and determined to ignite a science education revolution in Zimbabwe. He further underscored that Zimbabwe would leapfrog to a modern society through inculcating scientific mindsets and the timely dissemination of appropriate information as well as publicizing relevant research findings.

The Vice Chancellor of Bindura University of Science Education, Professor Eddie Mwenje also addressed the gathering and congratulated the President, His Excellency, Cde Emmerson Dambudzo Mnangagwa on his appointment as the new Chancellor of the University. He also congratulated the graduating class of 2018 and commended them for their hard work and resilience that had culminated in their being awarded degree qualifications.

Professor Mwenje also chronicled the various achievements of the university which included the introduction of new academic degree programmes, establishment of a centre for Food Security and Climate Change, university research projects, launch of the National Sports Academy and infrastructure development. He stressed that despite the numerous challenges the university had worked hard to achieve these milestones.

The Chairperson of Council, Mr Thomas Zondo Sakala, a representative of Zimbabwe Vice Chancellors’ Association (ZUVCA), Professor David Jambgwa Simbi, and the Student Representative Council President, Mr Pijiwest Nhamburo also took to the podium to congratulate the Chancellor, His Excellency Comrade Mnangagwa on his installation as the Chancellor of Bindura University of Science Education.